Anyone that wants to improve the situation and reduce some of the existential risks faces three problems:

Therefore, anybody that sees the need for the world to take an urgent action faces a difficult task when proposing pragmatic, fast and very radical changes to the way the world is governed. It seems to me that the only realistic route for humans to take is to create a new organisation, which would have the capacity, resources and resolve to act on behalf of all of us in the hour of the emerging existential threat. To have any chance of successful delivery of its foremost objective, i.e. to protect Humanity against existential risks, such an organisation should have supranational powers exceeding any prerogatives of the existing international bodies, such as the United Nations, NATO or WTO. We need an organization that would resemble the World Government. Only such an organisation, which should be operational latest by about 2030, would have some chance to mitigate not just global political and social risks but all other existential risks mentioned earlier.

The agenda of such an organisation should be governed by one key issue: Fighting existential risks. Any other objectives are subordinate to that goal, since if there is no Humanity and no civilisation there is no point to discuss other aims of such an organisation. 2030 is a threshold date, because by then we must have a full control mechanism over AI in place (see here). This objective is the driver for the entire scope of this website.

This chart shows the main areas that need to be fundamentally changed because of the threat from Superintelligence and other existential risks, culminating in creating a supranational governing organization that will lead us all through that perilous period. 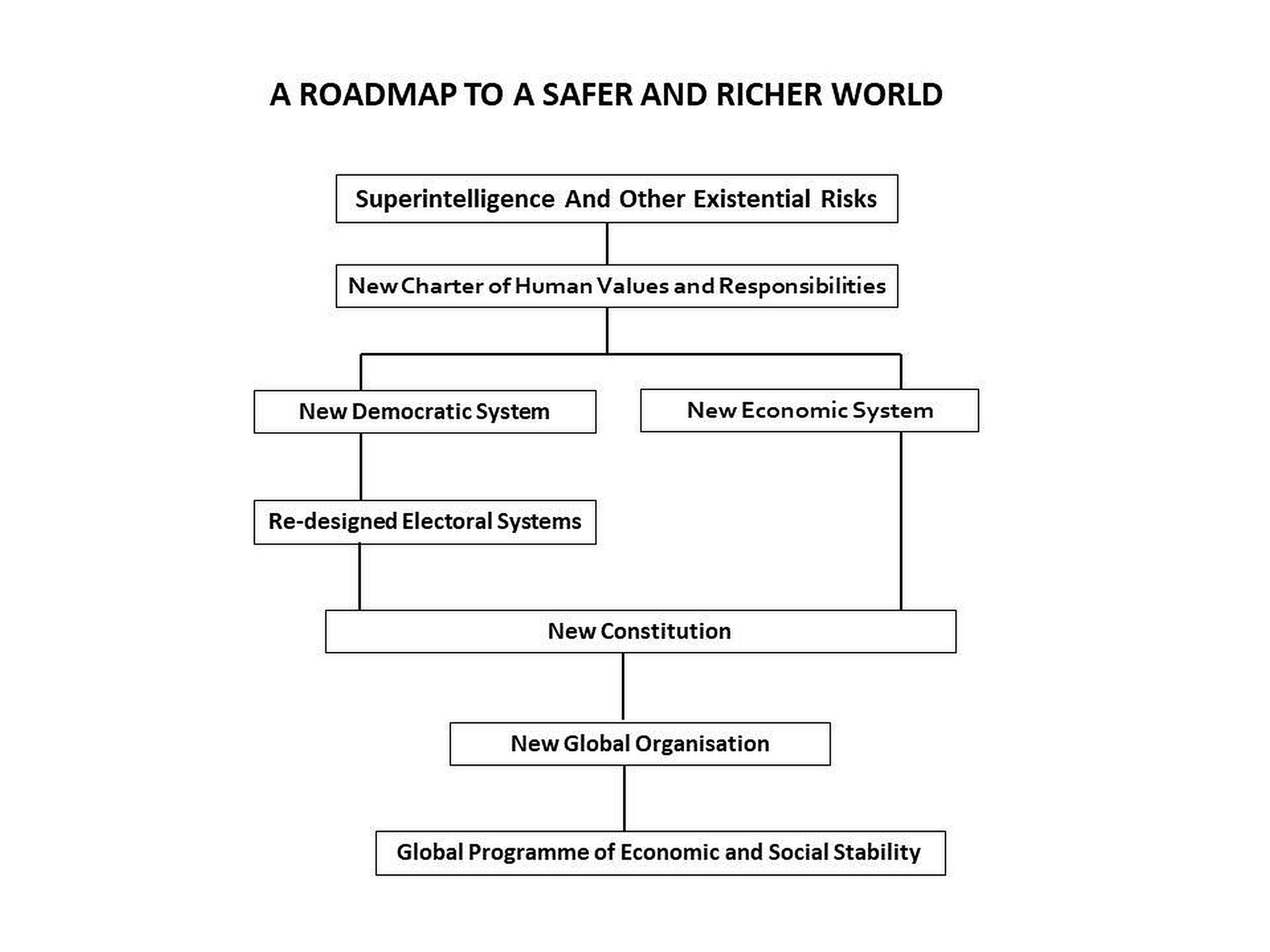 Now, the question is who could do it? What we are discussing here is how to guide Humanity and protect our civilisation in the next 20 years, while it passes through probably the most dangerous period in its history. By then Humanity could reach the point when it may already be coexisting with Superintelligence, which would hopefully act in unison with us, helping to sort out our problems.

We are already late in creating such a large supranational organisation. Perhaps one of the reasons is that many of us still hope for the UN to take up such a role, or that the UN itself will be quickly transformed into such an organisation. After all, this is the organisation that should deal with existential risks in the first place. Unfortunately, this is also the organisation that indirectly increases the Humanity’s overall existential risk by being almost totally ineffective in solving grave problems. UN may be trying to apply some solutions but quite often when it is too late, or a grave human, economic and ecological danger has already been done. In most cases it is just incapable of solving the problems at all (e.g. Syria or Libya). The best evidence in my view is the creation by the UN of the International Strategy for Disaster Reduction (UNISDR) the organization that was established in 1999. It has had hardly any influence on any of the top existential risks listed earlier. The only real impact that the UN has, considering its actual impact on legislation is the health area, especially the control of pandemics by WHO – probably the most effective UN agency and to some extent climate change by its otehr agency – the International Panel on Climate Change (IPCC). The reason behind that is simple. Such an organisation to act successfully would have needed the powers far superior than the UN has now. Since we know how embarrassingly ineffective the UN has been, no wonder that the world is practically left to be gradually sucked into the funnel of ever growing existential risks. Initially this will be hardly visible but further into the future the risks will tend to combine. At that time there may be no organisation or a country powerful enough to stop the demise of our civilisation.

Transforming the UN into the World Government is also a futile hope, because of the very way the UN makes decisions – the unanimity voting in the Security Council. The presence of the unanimity voting for most decisions made by the European Council is the same reason why the EU has been less effective than it could have been. Fortunately, the Lisbon Treaty has finally created a possibility for the European Council to vote using a qualified majority on more subject domains than ever before.

Since the existential risks can materialize at any time, e.g. natural pandemics like the Coronavirus pandemics in 2020 or due to laboratory-generated bugs being maliciously released in the open, we should have an organization that could act as de facto World Government right now. I have already indicated earlier on, that creating the World Government from scratch at such a short time, is not feasible. Therefore, the only way that could happen, is by transforming an existing organisation, or empower a single large country with supranational powers, into the World Government. That new global organisation would gradually substitute the UN, based on a fundamental review of human values.

2 thoughts on “4. Federate to Survive”

What kind of federation for the European Union?

Will 2030 be a tipping point for Artificial Intelligence?

Conference on the European Democracy

The accelerated pace of AI in the post-pandemic world

Work and lifestyle in the age of Superintelligence

Who could save Humanity from Superintelligence?

Transition to a more sustainable and harmonious world

From the European Union to a Human Federation

Consensual Debating for the Tempus Club